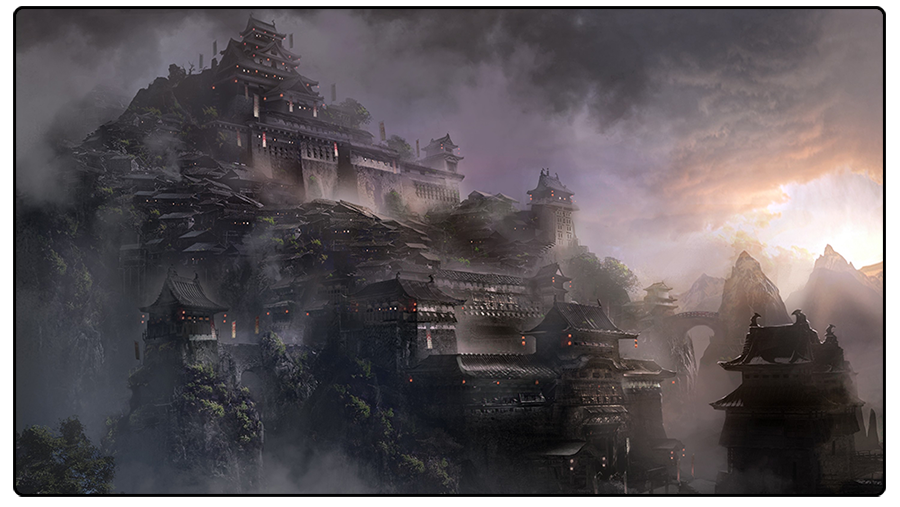 The Meikyo Nation, as beautiful as it is, is not for the feint of heart. The original inhabitants of this nation, humans and elves that found common ground, lived high in the mountains. They saw the advantage it granted them against their enemies so instead of moving to a different area they carved out an existence for themselves. Using the fertile valley for their farmlands, mountains for their cities and the river branching through the country for fishing and transport. The harsh mountain landscape and flood-risky valley also forced them to learn how to build their buildings on high platforms and elevations, creating an awe-inspiring image of houses and even castles built along the side of the mountain range or hovering a few meters in the air along the valley.

They forged their place in the world with blood, sweat and immense creativity. When they started digging into the mountains they discovered an abundance of precious metals, minerals and...probably most importantly...iron. Through trial and error they developed steel and figured out how to make tools, materials and, most importantly, weapons and armour.

They adopted a feudal system of ruling, with the Shogun or 'Warlord' at the head of the nation, their Daimyo or 'private land owner'(their form of nobility) beneath them and then the commoners beneath them. Their natural advantage in the mountains allowed them to develop their military in such a way to use the advantage of their landscape to its full potential. Through the centuries they developed a force that, despite being outnumbered by all the other major nations, was still very formidable. A testament of this defence is Hangetsu or 'Half-moon' Palace in the capital of Sakurai, which makes use of multiple layers and elevations for its defence to protect the Shogun that resides within.

One day the earth shook. The mountains roared, the skies darkened and all manner of strange and monstrous creatures broke loose from the heavens. The Cataclysm had come. The people of the nation believed that the gods rewarded them for their devotion, and punished them for their sins. They built a stunning temple on the highest peak of the mountains, even higher than the palace of the Shogun, and christened it 'Jion' Temple or 'Temple of mercy' if translated loosely to the basic tongue. When it came out that select individuals were gifted with the powers of the Myst, an entire change in their religious views came forth. They were seen as blessed by the gods themselves and these members soon took up some of the most important roles in their society, becoming priests, warriors and eventually nobility. The temple soon became not only a place of worship, but a place to study and develop this divine gift bestowed upon them by the gods. These magi and elite warriors would be known as the 'Kensei' or 'Sword Saints', and became their most elite soldiers and best defence against the dark monsters or 'Oni' released upon their land by the Myst. Eventually the Kensei became a title of nobility much like knights in some of the provinces and is a position worthy of honour and respect.

Over the centuries they developed into a country bustling with activity, yet still somewhat withdrawn from the world. They developed ships that are a perfect balance for traversing their rivers and travelling over the seas. These ships had a very characteristic look about them and it didn't take long for them to don the name 'Yongseon' or 'Dragon ship', named after their 'dragon wing' sails and manoeuvrability both in rivers and oceans being as swift as a dragon. This trade with the other countries helped them develop tremendously as a nation, giving them access to materials, products, technology and even teachings of the Myst which only helped them grow more. This trade also helped them open up more to the outside world.

Finally their contact with the outside world attracted the attention of a hardy, tough and Myst-hating neighbour. Nal Akima had come. The winter warriors had learned of the rich lands of

Meikyo as well as their devotion to the Myst and how close it's tied to them. A perfect recipe for a people like them. First it started only with a few small boats to scout the land, then finally an enormous war broke loose. It was a bloody and swift war that cost the lives of many on both sides, but Meikyo held their ground and beat the Vikings back. The Vikings got their taste of how bountiful Meikyo is and Meikyo got a taste of how to wage open war with a major nation. Both nations developed from this war and since then there have been several raids where the raiders steal food, riches and kill a bunch of 'heathens' and where the Meikyoans test their combat capability and develop their skills and tactics. In a way it's something of a good practice session on both sides and it keeps the two nations on their toes.

These engagements gave way to a new invention. Built upon the basis of the Dragon Ship and modified specifically for river engagements, the 'Geobukseon' or 'Turtle Ship' was born. Surrounded with hollow tubes designed for magi the cast their spells through it and Scorpions to fire through it and covered by a spiked steel shell on top to repel boarding or bombardment, this ship is manoeuvrable, heavily armoured and a dangerous force to encounter in the narrow rivers of the Meikyo valley.

In the present day Meikyo is a thriving nation with a rich culture and beautiful landscape. The frequently trade with the other nations while trying their best to steer clear from Nal Akima as best they can. They have a decently sized and well trained standing army to keep their lands and the hardworking population safe, and a powerful navy to defend their shores and riverbanks. The Shogun rules at the top of the hierarchy, with their Daimyo underneath them to assist in running the country smoothly. Finally at the top is the powerful Kensei, making up the noble class of the populace and elite force in charge of keeping the ruling body safe and follow their orders to the letter.

The palace that belongs to the ruling Shogun of the nation. This is also the meeting place between the Shogun and the Daimyo who rules beneath them. Built high in the mountains, the palace is one of the most defensible and reinforced fortresses in the entire area. Built long before the Cataclysm, it's one of the oldest and grandest buildings in the continent. Located in the capital of Sakurai, it's position allows it to overlook the entire city and operate as a garrison for its main force along with protecting the Shogun from their enemies. Even if an invading force breaks through all the other defences of the nation, taking the capital or breaching the palace's gates won't be an easy task.

Great temple built after the Cataclysm to their gods, believing that the Cataclysm was sent for their devotion and in turn it's their duty to use the Myst to worship the gods. This enormous temple is built on the highest peak along the mountain range in the Meikyo nation. The rings are placed in such a way to encircle the rising sun and shine its rays onto the main temple containing the figures of their gods. This location functions not only as a place of worship, but as a university to study the Myst and how to harness it, as a school to train those gifted to use the Myst and turn them into elite warrior-magi known as Kensei(Sword Saints). These troops are very high nobility second only to the Daimyo and Shogun, and operate as the elite force and royal guard of the Shogun. Hangetsu Palace is almost entirely manned by Kensei.

Series of 3 fortresses built over the Sochin river leading from the ocean into the Meikyo valley. While they might appear to be the only defence on the river, they have plenty of hidden spikes, chains and other extreme hazards at their disposal to make entering the canyon(and the valley within) a monumental task. The natural bottleneck provided by the cliffs along the shores also gives them a great advantage to stall invading enemies. The river is also patrolled by warships to monitor traffic, inspect ships for illegal wares and stall enemies together with the castles. The architecture is surely an awe-inspiring sight to behold when travelling along the river.

The great valley of the Meikyo nation and the primary source of food for the country. Flat in some areas, hills in others and great forests here and there is what makes the majority of the landscape. An enormous part of the valley is dedicated only to farmland, including the hills which the Meikyoans have figured out how to cultivate and utilize for farming. Though there are wild areas, where animals roam as well as the demonic Oni that were brought forth from the Myst by the Cataclysm. A bunch of villages as well as cities are also located in the valley to house the populace. More cities pop up the closer one gets to the mountain range while villages are more commonly seen along the river and in the valley. During the winter the valley can get covered entirely by snow, making farming during summer immensely crucial.

There is one small pass through the mountain range that leads into Meikyo from both the Lantheri wilds as well as Cathwa. This pass is walled off and bottle-necked by an enormous fortress known as the The Lion's Jaw. Standing at 120 meters tall and 30 meters thick, this wall of enchanted stone is built to house a garrison of troops and allows it to defend this pass from enemies trying to assault by land. The only way past this architectural and magical wonder is the reinforced, multi-layer gates in the middle of the wall. At normal operation these gates, the portcullis and secondary gate are open to allow traders, travellers and other people to travel into the country with a quicker access to the bigger cities than the rivers. In times of war the gateway is shut and warded off with powerful spells, and the siege engines and magi on top can rain hell down on invaders.