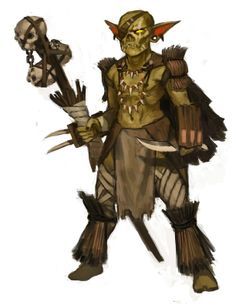 ► Hand of the Queen​

Rhett, like many goblins, came to be as a fully grown adult spit out from the Myst onto this plane almost a decade ago somewhere around Kreige. Astonishingly Rhett avoided the persecution of The Watchers and made his way through the world as a thief and bandit, falling in and out of crowds of the like for the majority of the time he's spent on this plane. Rhett was always willing to stab his companions in the back for a better chance at success, and showed fierce loyalty to his superiors. Rhett is without a doubt a snake, and would do anything to get ahead, however he would never betray a superior for risk of losing whatever comforts he enjoys because of his position within whatever group would have him.

These things are what brought him to the attention of Rayne Maxis, one of the Queens of The Mysty Isle. Once he discovered the existence of the budding kingdom of The Mysty Isle, Rhett fled there immediately, a land where all races were safe from persecution was an obvious choice for the goblin. Rhett, once landed on the island kingdom, began to quickly show loyalty to his new Queen, a driven individual, Rhett showed he had many talents to benefit the Queen, mostly to make up for being physically weak, he showed his loyalty, and willingness to do anything to gain his position, including spying on problematic issues, and keeping an ear to the ground.

As such the Queen has bestowed a great deal of comfort on the goblin, in return for his loyalty and hard work, though she is fully aware of his personality, this is perhaps the reason she keeps him so close...